There are hundreds of highly skilled people involved in making films — from the director to the key grips and runners — and Script Supervisor Lucy Noble is one of many UCA graduates who’ve gone on to excel in jobs across the industry. 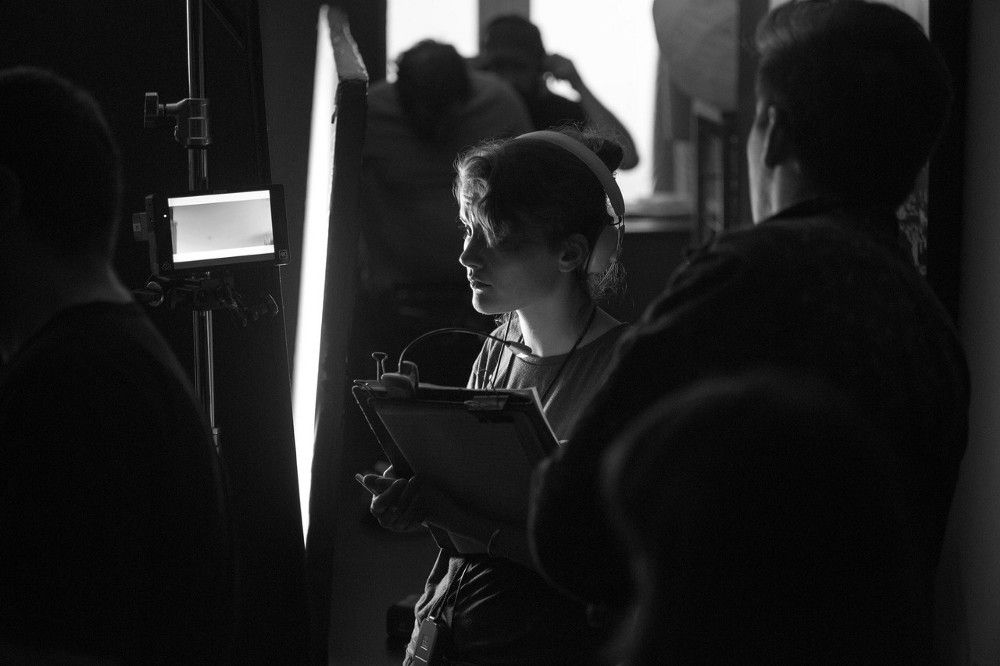 Since graduating in Film Production in 2014, she’s worked on Marvel Studios’ Black Widow, season one of hit series Devs, Elton John musical Rocketman and Steven Spielberg’s Ready Player One, and many more.

We caught up with her find out about her passion for film, how she got into the industry, and what it’s like to be a script supervisor.

Hi Lucy. So, tell us a bit about yourself — where did your passion for film start?

I grew up in a rural area of Herefordshire, certainly not an area with a lot of Film and TV connections. My dad is a very passionate film watcher and encouraged me to be well acquainted with variety of film styles and eras, particularly European films. When it felt like everyone else was watching the next blockbuster, I was watching La Nuit Americaine, L’Année dernière à Marienbad and Les Enfants du Paradis.

Not to say I didn’t and don’t enjoy a Hollywood blockbuster — they’re often where my work comes from now! But I had quite an eclectic ‘bringing up’ with films, which I think has helped with my main interest in how a story, however loosely, is constructed and conveyed. I will watch whatever I can, whenever I can — it is a real enjoyment.

Clearly Film Production at UCA was an ideal degree for you, then. How did the degree help you on your career path?

I had dabbled with script supervision throughout university — as a student specialising in post-production, the role was a great source of information for me. I wanted to learn more and reached out to script supervisors working professionally to see if I could shadow them on set. This was primarily to help me understand how they worked and how best to interact with them from a post-production point of view.

But the more I observed, the more I wanted to be involved. A lot of your degree is making choices and learning to be assured in what it is you want to say and convey to others. Communication is so important to a script supervisor, particularly when time is precious and, of course, diplomacy is key. These were all useful skills I had started to develop during my time at UCA, without realising how important they would become. Every group discussion was practice — even the ones where I just listened. Actually, listening to how people convey and articulate their ideas and then seeing them translated on screen can teach you some valuable lessons.

What were your favourite experiences at UCA?

I hugely enjoyed cutting with the Steenbeck editing tables — real tangible reels of film you can pick up, cut and put together — it gives you a physical discipline and reminds you that even now, in our mostly fast-paced digital industry, that every take means time, effort and has value. I spent a lot of time digging through the library for things recommended by tutors. There’s so much on offer there.

Also, being in the UCA film studio was definitely always enjoyable. I spend a lot of days in studios now — I would encourage people to get in there and practice in an arena where you’ll have a huge amount of control that you don’t always get when working on location.

You’ve worked on a number of amazing films and shows — what constitutes a “day at the office” for you?

It’s interesting that, whether a film is a huge multi-location, multi-unit shoot or a one camera TV drama, our end-goal remains the same: to ensure the film can cut together.

We observe everything that is shot and provide a record of notes detailing all the information the editor needs to make the decisions of how best to construct the scene with the intentions and thoughts of the director. We are also known as Continuity — we are responsible for maintaining the continuity of action and logic as much as can be achieved during a shoot — which is important, as films are rarely shot in order.

I’m often in an hour before everything kicks off checking for any new script pages, setting up the documents that will be filled in throughout the day, and liaising with other departments about the scenes that are being shot next. I get asked a lot of questions, so we have to do our homework and be prepared. For example:

“Does he wear the blue jacket or has it been left behind in the car?”

“What time is this scene set at? We have a clock on the mantelpiece.”

“Do you know if the gun was in the left or the right holster?”

“Which takes from yesterday’s scenes are we matching to?”

These are all examples of things I need to be able to answer — so I do this by being observant, organised and knowing my resources. It’s a constant flow of information.

We often sit next to the director so we can note down their thoughts and views on the takes and be on hand to provide assistance to the actors, quickly and succinctly. Every director and actor is different and you learn to quickly develop a portfolio of working methods — it’s not one size fits all. Any line or action changes during filming must be noted and placed into the master script, which in turn goes to the editors.

It can be easy to get caught up in what can be an intense setting, so I make sure to move around the set and check in with other departments throughout the day.

Camera, video and sound rely on me to decide on and inform them of a slate number used to categorise and label each shot. Assistant Directors check with us how things are going — what coverage do we still need. You have to keep the communication up.

After every shot I collect details from the camera department — lens sizes, frame rates, filters, focal distances — there is a modern habit to reshoot parts of films as a way of developing the script and this information is vital to ensure it will match. We work closely with VFX in this way on bigger projects where there are often more CGI elements that require a lot of data to be collected. I also collect a huge number of pictures, documenting the way props have fallen or how curtains are hung for when we shoot the reverse in a completely different place. SFX rigs used, costumes used on stunt doubles, complex camera formations… they are all captured and sorted.

I also have to co-ordinate information for other units shooting separately — references, director notes and pick-up shots that need doing — as well as ingest the information they send back. We can often pick up from their shooting and vice versa.

Those in the production office need me to inform them of what was shot that day and maintain how long the film is running — this important for TV especially, which can have specific runtime slots.

Traditionally, this role is done by one person, but that’s changing as the films have got bigger and faster-paced, and increasingly the work is spread across two or even three of us. It’s great that we now often work as a team, and I’m pleased the film studios are supporting us in this way. I’ve worked extensively as an assistant script supervisor, and that has meant I was able to work on large projects from early on, such as Warner Brothers’ The Conjuring 2 and most recently Marvel Studios’ Black Widow.

I never know how much I can say about anything in pre-production! But I have a publicist’s words in my ears: If you don’t know — don’t say! She’s very wise. I will say I’m prepping as an assistant script supervisor on a feature film right now: it is great that we’re up and running again after a really tough summer of being on hold.

What’s been the best experience of your career so far?

I’m always just amazed to be working, doing what I’m doing — I’m thankful for everything. I was very lucky to work on Ready Player One directed by Steven Spielberg, I assisted the fabulous Zoe Morgan and it was certainly ‘epic’. The technology they used to create and film within a digital world was so interesting and it’s a chance of a lifetime to be able to watch and learn from Mr Spielberg at work. Obviously the pandemic has had a huge impact on the film and TV industry but how has it affected you, and have you managed to get around it at all?

The shutdown due to the pandemic was tough — the nature of our work is ‘freelance’ based but that can be a mix of PAYE contracts and self-employment, so when the work dried up a lot of us were not protected by the furlough schemes. I was taught early on that savings are a must in this industry — you never know when the tide can turn.

I’m very grateful to be on a project now that has been greenlit, as it has the safety requirements to go ahead and start filming again. Productions are putting into place a variety of measures including testing, temperature checking, and masks to keep everyone well and safe. Film crew are some of the most adaptable people I know! It doesn’t take us long to get used to the unknown.

What advice would you give to anyone thinking of going down a similar career path?

Be sure you understand the role — a lot of people think Script Supervisors are involved with editing and developing the script, and whilst we maintain it and edit it to reflect the shoot, we are not the writers. It can be a very rewarding and fulfilling role, but it takes a lot of dedication and understanding.

Be flexible — in assisting, I have come across lots of methods of note-taking: whether its pen and paper, iPads, photos — there’s no right or wrong way, as long as at the end of the day the information that is required is provided in a way that is understood. You will develop what works best for you.

Don’t be a show-off — We are often the person that has all the answers to things, but it’s how you provide them that can matter. You don’t have to save the day — just do your job and it’s appreciated quietly.

Kindness is always key — it’s a tough industry. There’s still a lot of prejudices to improve on within the film industry, and that starts with people simply being kinder to each other.

To find out more about studying at UCA, visit our course pages.