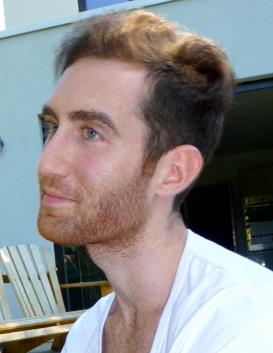 Rob teaches Moving Image Culture, a unit that introduces Games Arts students to the academic study of video games and the place of the medium in relation to fields of visual studies, moving image media and new media.

My research interests cut across video game studies, screen studies and Critical Theory, with a focus on how video games shape the minds and bodies of their players.

My doctoral thesis Immunitary Gaming: Mapping the First-Person Shooter mapped the visual elements of the first-person interface and investigated the way that these elements operate to subjectify the player as an insecure and self-interested individual. I continue to develop research in this area.

I teach the Moving Image Culture unit at UCA Farnham, a course that introduces Games Arts students to the academic study of video games and the place of the medium in relation to fields of visual studies, moving image media and new media.

My PhD thesis, Immunitary Gaming, understands video games with a first-person interface as heralding important changes in the form and values of Western image systems including, linear perspective, cartography and the cinema. I argue that the first-person interface remediates these image systems and reconfigures their underlying ideological functions which also implies a reimagining of the relationship between their viewers and users. Giorgio Agamben has argued that the apparatuses of late modernity no longer subjectify like their forebears, but desubjectify the individual, producing an impotent neoliberal body politic. I trace a similar development at work in contemporary video games and their interfaces.

My work seeks to reconfigure the claim that the video game is an action-based medium by considering popular multiplayer FPS games as “reaction-based” particularly, via the metaphor of an immune reaction. By inciting insecurity and self-protective actions in the player, games like Activision’s Call of Duty franchise and EA’s Battlefield series are seen in my work as vividly dramatising the immunitary lens on contemporary biopolitics developed by Roberto Esposito.

Video games are framed in my work as capable of offering glimpses into both the present and the future of the technological and political context of Western culture. But, importantly, these changes are reflected and reproduced by a reconstitution of the senses of the player, especially their vision.

In its valorisation of the individual and production of insecurity to incite action, my work positions the first-person interface as a symbolic form of immunitary neoliberal governmentality.