Two MA Graphic Design graduates have tackled the issue of personal safety - particularly for women - in their final major projects. Keelin Wright and Stephanie Bignell both set out to change the narrative and improve safety for women and young people online, and on nights out, with their innovative ideas.

Keelin Wright’s final major project, BeSavvy, is a design for an app that helps people decide where to go on nights out.

“Drink spiking is a real issue, and something I wanted to tackle,” she said. “Some young people, especially women, feel they need to take clingfilm on nights out to cover their drinks, or simply avoid certain bars and clubs. I wanted to do something to make a positive change to young people’s safety on a night out.”

Keelin’s app concept allows users to rate pubs and nightspots for safety, and also staff/venue response to incidents. This gives app users the chance to make an informed decision about where to go and which venues to support with their custom. It also contains a function to report an incident and a 'get help' button to use in an emergency. 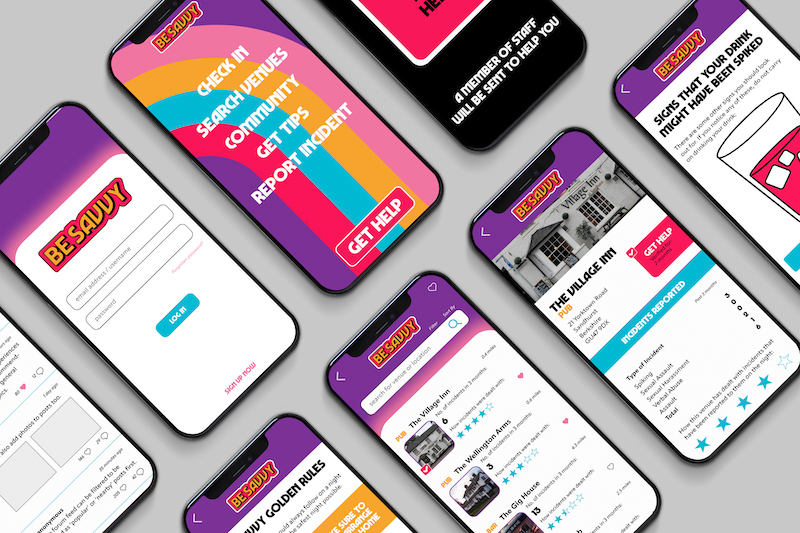 “I would love to take my idea further and turn BeSavvy into a widely available app," she said. "It’s such an important topic. After putting so much time and effort into this project, not to try and take it further would be a waste.”

“My next steps will be to approach developers and find the right people who can help me turn it into a reality.”

We asked Keelin what advice she would give current and future UCA students keen get the best from their uni experience.

“Just get completely stuck in,” she said. “Ask loads of questions and don’t ever feel that a question is too silly, because those, in particular, can lead to interesting conversations. Also - and I can’t stress this enough - make full use of the facilities! And go to exhibitions, read magazines, follow people whose work you love – never stop looking for inspiration. The last bit of advice that I would give is about tutorials – these are so valuable, so make sure to go to every single one possible, even if you haven’t made much progress with a project.”

Stephanie Bignell’s final major project is all about online harassment and trolling. She’s created She Speaks Out, a zine with an Instagram account that already has more than 5,000 followers. 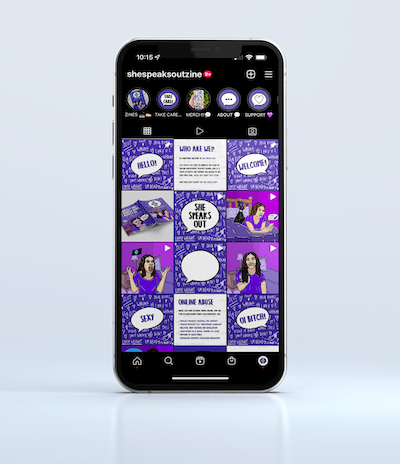 It was on Instagram that Stephanie first encountered online harassment herself.

“I have had many experiences of harassment, which have made me so angry and upset,” she said. “The things men send to women online range from sexualised language/content to misogynistic behaviour, inappropriate remarks, body shaming comments, etc. The experiences that I have faced and witnessed, and the lack of action to tackle the issue, inspired me to create my zine. My aim has been to create an online community with a campaign-like approach that unites women and encourages them to speak out rather than stay silent.” 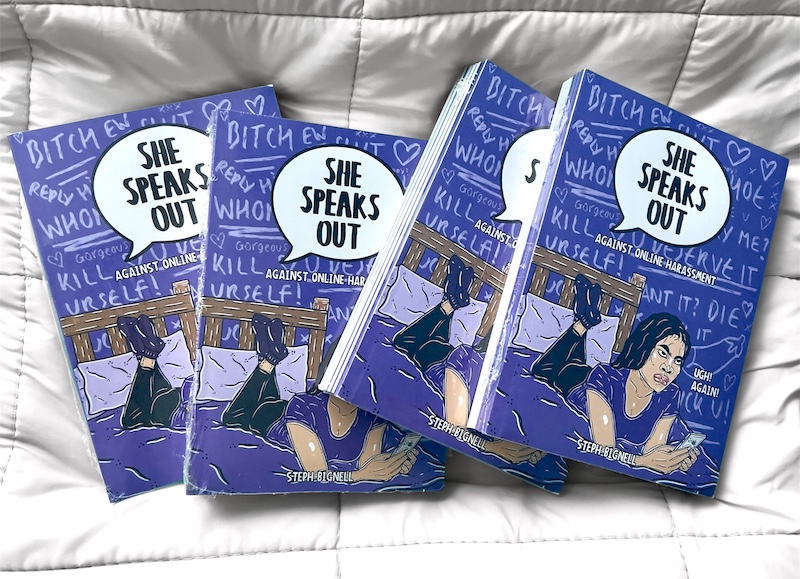 The zine shares information on what online harassment is and the different forms it takes. It also amplifies women’s voices and experiences.

“I would love my campaign to become something well known - a strong community that women go to for support and safety; a space to vent and be heard, as well as listen to others. Ideally it would also become a space for others to learn more about what’s going on, especially on social media,” Stephanie said.

"My hope is that creating a strong community of women who speak out about their experiences can help us to reach the people who run social media platforms, who can take further action to create the changes women want and need to feel safe online.

Stephanie wants to take She Speaks Out as far as she can, and is seeking help from The Princes Trust to get her business model up and running.

“I have really enjoyed my MA experience. I was given the right support to break out of my shell, experiment and get out of my comfort zone, which I needed this year,” she said. “I’ve been able to create projects that I am proud of, which I feel have made me a better designer. I have developed my communication, organisation, professionalism and subject knowledge, and have learned a lot of new technical skills that have impacted my work. All of this will really benefit me in my career.”

Find out more about Graphic Design at UCA.