How UCA research is helping shape
a more sustainable economy

Professor Martin Charter, Director of our Centre for Sustainable Design, on his mission to ‘design out’ waste in industries from fishing to fashion. 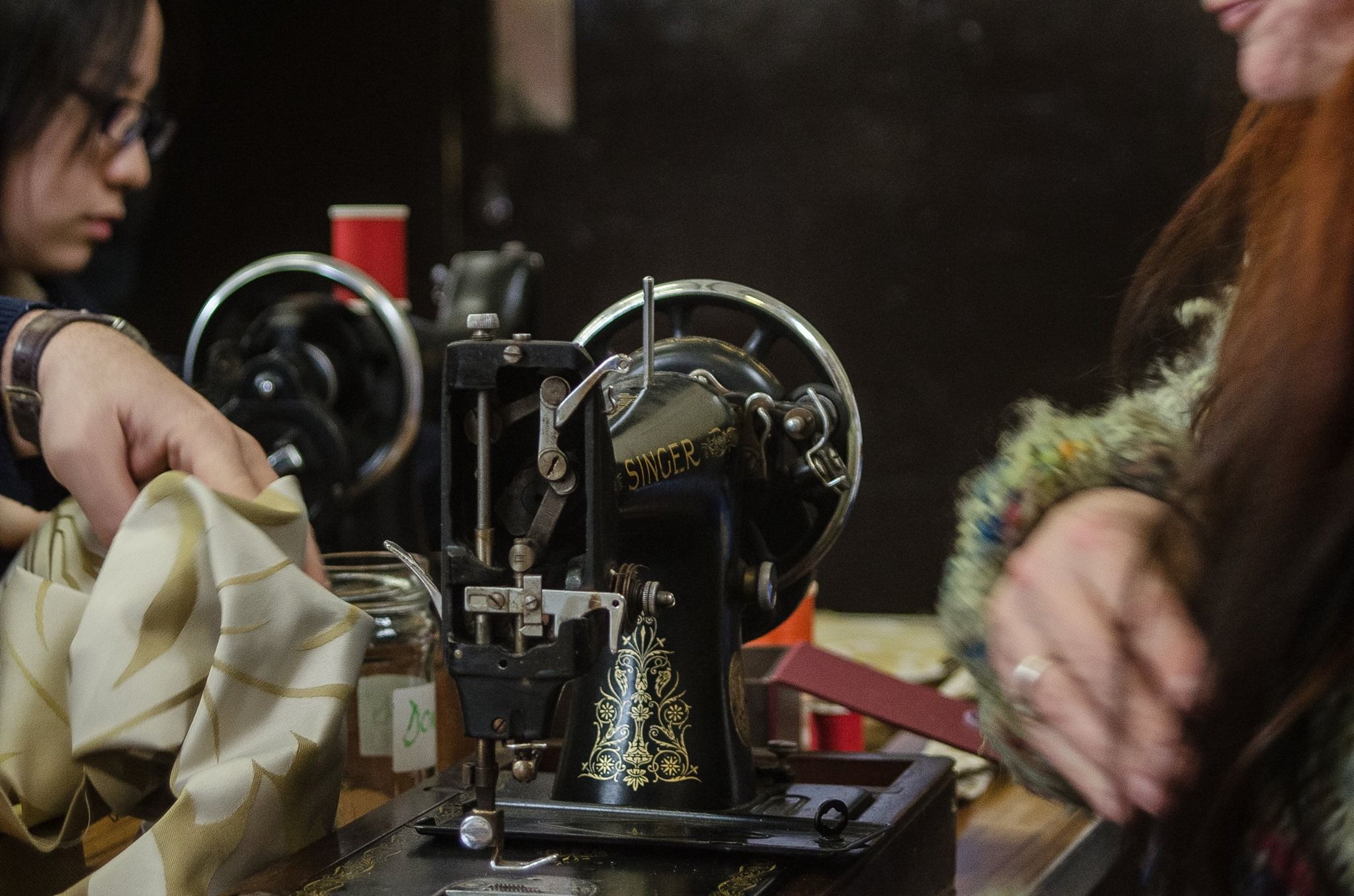 The UK generates more than 222.9 million tonnes a year in waste, and less than 50 per cent of this is recycled. In the past decade, startling figures such as this have contributed to a renewed interest in mending and repair, as more of us wake up to conscious consumerism.

Professor Martin Charter, the Director of The Centre for Sustainable Design (CfSD), has been researching the circular economy — a model that seeks to ‘design out’ waste — since the mid-1990s, and working to drive change in consumer attitudes at a grassroots level since 2014, through Farnham’s Repair Café.

The Repair Café serves as a community workshop where Farnham citizens can bring faulty household items to be fixed by a team of skilled volunteers. Ultimately, it aims to help reduce waste by encouraging a repair culture in the local community. It also has the happy side effect of saving carbon emissions while providing important social interaction.

“I believe there is this tremendous untapped resource of skill in most communities,” says Charter referring to the team of repair volunteers he works with at the café. “What we’ve found through our global surveys and the data collected in Farnham, is that, on average, about two-thirds of products can be repaired by people within the community, even though they are not designed to be.”

Charter first became aware of the repair café concept in 2014 after witnessing a talk by Dutch environmentalist and former journalist Martine Postma at a conference in Hanover, Germany. The idea dovetailed perfectly with the research that Charter had been completing since the mid-1990s that had started come together under the term ‘circular economy’. A circular economy is based on the principles of designing out waste and pollution, keeping products and materials in use, and regenerating natural systems.

“I was a bit of a grey hair, even then, in the field of sustainability, but I hadn’t heard of repair cafés,” remembers Charter. “It seemed like another form of modern environmentalism, and that interested me. This was grassroots innovation that was about actions and practicality, not just flag-waving.”

After partnering with Postma on the world’s first two global repair café surveys, which revealed the activities and motivations of repair café participants across the world, Charter started to notice the emergence of a trend for making, modifying and fixing. Fuelled by online videos showing individuals how to make, modify and fix, the growing interest among the public led to the creation of places and spaces dedicated to these activities, such as makerspaces, hacker spaces, tech shops and, of course, repair cafés.

After organising a conference called Makers and Fixers, Charter decided to establish a local repair café in Farnham. Set up in 2014, The Farnham Repair Café took on charitable status in 2017, gaining a board of trustees. Since then, it has been steadily growing in popularity, with 60 sessions held to date. Its environmental, social and economic impact on the local community has exceeded expectations. “We’ve made £105,000 worth of savings to members of the community by extending the life of their products, saved 3.8 tonnes of product from landfill,” Charter says.

Every time a new product is produced, CO2 is released into the atmosphere through the energy used to extract and transport raw materials, as well as through emissions from manufacturing processes. When we extend the life of an existing product, we eliminate the need to purchase a new product, and the carbon emissions associated with making it.

At Farnham, the team has calculated that its workshops have helped to save 36 tonnes of CO2 from being produced. The organisation has even developed a free online carbon savings calculator. Built using an algorithm developed by one of the Farnham Repair café’s trustees as part of their masters’ thesis, this tool enables users to determine the CO2 savings associated with a repair based on the weight and/or type of product.

There are now 2100 repair cafés across the globe, with most concentrated in the Netherlands, Germany France and Belgium. In 2019, Charter completed and published a third survey on global repair cafes with The University of Manchester and Erasmus University Rotterdam — a paper outlining the findings is now in preparation.

“The reason why repair cafés are so successful is that the customers get a direct benefit,” explains Charter. “At Farnham Repair Café, 65 per cent of the time they get a repaired product. And we know through our research that consumers — particularly those aged over 50 — really don’t like to throw a product away.

“There is also a tremendous sense of community, and customers also enjoy the social dimension of the Repair Cafe. Our research tells us that this is particularly important to female customers and also retired male repairers, who tend to be more isolated. The repairers like coming together once a month, tackling a problem, giving something back to the local community, and having a laugh.”

Charter predicts that repair cafés will experience a huge surge in interest once Covid-related restrictions ease. During lockdown, when physical meet-ups were not possible, the group set up a Facebook advice service, which has provided support to over 80 customers. Post-pandemic, Charter predicts that hunger for social interaction, coupled with what he refers to as the “fifth green consumer wave” may well lead to growing interest in local community initiatives like repair cafes.

The fourth and fifth “green waves”

Charter has worked in the field of sustainability since the late 1980s. He set up The Centre for Sustainable Design (CfSD) in 1995, and has since undertaken 15–20 European-funded projects and written five books. Over the years he has observed how different environmental issues have come to the fore for each generation. He believes that the most recent wave, however, is the most significant yet, due to the strong engagement of youth and the acceleration that social media provides.

“The fourth wave started at the beginning of 2020 and was driven by youth; Generation Z was going onto the streets and taking action,” he recalls. “This is the first generation that has born into a fully digital world, where concerns over climate change are the new normal. There’s often a link between health and sustainability in the surveys, so concern will have been heightened by the pandemic.

“What we’re now starting to see is another wave emerging with a lot more press on sustainability issues, big forums being organised and big companies getting involved. It feels like now or never.”

Another environmental issue that has been brought to the fore in recent years is the huge problem of ocean plastic. Charter’s developing focus on circular business models led to the CfSD being invited to take part in two projects that have been set up to tackle the issue: Circular Ocean (2015–18) and Blue Circular Economy (2018–2022) — both funded by the EU Northern Periphery and Arctic (NPA) Programme.

The European Commission believes that waste from discarded nets and ropes accounts for around 28 per cent of all ocean plastic. So, for Circular Ocean, the CfSD was brought on board to consider how small companies could convert fishing waste into products.

With Blue Circular Economy, Charter concentrated his efforts on bringing together stakeholders from the business and innovation and fishing industries in the ports of Ålesund in Norway and Galway in Ireland. The goal was to connect diverse local stakeholders in port city areas and support them to share knowledge and think about how to transform waste fishing gear into products. The work builds on lessons learnt from Charter’s previous work establishing networks of eco-innovators in the southeast of England.

“The people involved in innovation systems — those who run maker spaces, incubators or conduct research at universities — tend to be quite separated from the local fishing community,” says Charter. “We developed a methodology to bring the business and innovation community together with the fishing community in Ålesund and Galway in a series of workshops.”

After identifying the stakeholders and the key issues, the team developed the concept of an innovation lab — a physical space for identifying business opportunities where nets could be processed, assembled and manufactured into new products with an associated incubator for start-up companies.

These products could include clothing made from materials such as Econyl — a second-life nylon made from fishing nets that is now being used by designers and high street clothing labels alike — or products like skateboards and sunglasses that are currently being made from recycled fishing nets by the US- and Chile-based company Bureo.

In addition to the workshops, Charter and the CfSD published six research reports and feasibility studies, developed webinars and a design competition, and produced a new Circular-Ocean-specific version of CfSD’s Eco-innovation Guide for Start-ups, Entrepreneurs & Small and Medium-Sized Enterprises.

Looking to the future

Charter’s long-standing expertise in eco-innovation and the circular economy, developed through multiple international, national and regional studies, has led him into many areas. These include the drafting of four national and international standards which shape how circular economy and eco-design principles are implemented by businesses. Due to his extensive knowledge of Circular Economy, Charter was invited to be part of the core group that published the world’s 1st standard on implementing circularity into organisations — BS8001:2017. Subsequently, he was invited to lead UK’s delegation on the first global Circular Economy standards development — ISO TC 323.

In 2018, he published the book Designing for the Circular Economy. With 34 chapters from leading thinkers and practitioners worldwide, it brings together the key findings from his research with advanced thinking on replacing linear models with circular ones and extending product life.

Most recently, Charter chaired a group of international experts that developed ISO14006:2020 — a revision of the 2011 standard (which he also convened) that sets guidelines for incorporating eco-design into Environmental Management Systems. In March 2021, he organised his 23rd international Sustainable Innovation conference. After being forced to move fully online due to the pandemic, the seven-day event took place on Zoom and addressed the pressing issue of accelerating sustainability in the fashion, clothing and apparel sectors. It included 50 presenters and over 400 delegates from over 25 countries.

As concern for the environment grows and terms such as the circular economy and eco-innovation become more commonplace, Charter’s important work shows no sign of slowing.

“It’s essential that the world moves in a sustainable direction if we are to flourish,” he reflects. “Glocalisation — thinking and acting at a global and local level — is key, and digitalisation will help to accelerate that. However, one-to-one and one-to-many social connections are essential for wellbeing and creativity, too; a blended world is the future.”