Third in our series profiling UCA changemakers, we talk to BA (Hons) Illustration & Animation 2021 graduate Emily Larkin, who used her very personal experience to highlight the challenges faced by those with hearing disorders. 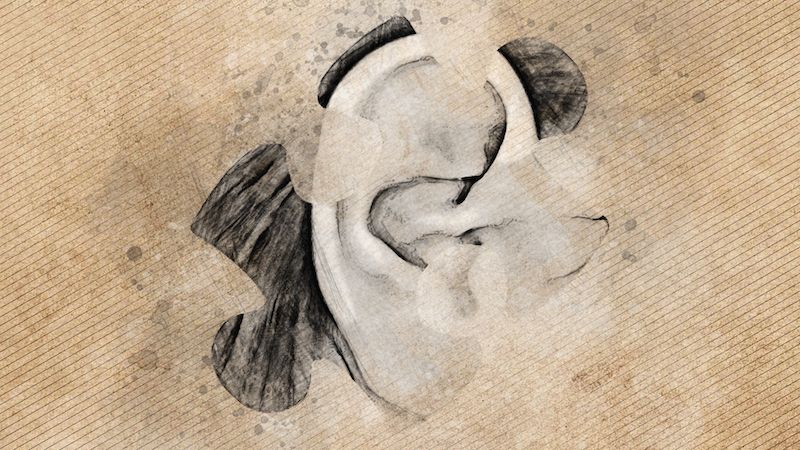 For her self-initiated final project, Emily Larkin wanted to create an animation with a personal connection. “Very little is known about a condition I live with, despite many people having the same or similar,” she says. “I knew raising awareness about Vestibular (inner ear) Disorders should be the topic of my project, and so the idea of ‘Spinning into Silence’ was born.”

The result is a 2D, hand-drawn experimental animation featuring layered audio and a poem written by Emily that communicates her personal experience. “I wanted to show what life is like for people living with these conditions,” she continues. “Whilst they affect everyone differently, the most common symptoms are hearing loss, dizziness/vertigo and balance problems. I kept the visuals simple, so the audience is able to process the audio at the same time.”

182 hand-drawn layers per frame were needed to achieve the visual texture, which means, at a little over 3 mins long with 24 Frames Per Second, the total number of layers was around 786,240. “That doesn’t include the experiments that didn't make the cut!” says Emily. “There are also some visual 'easter eggs’ – every 6th ear in the last scene has a hearing aid, reflecting the fact that 1 in 6 people have some level of hearing loss, while the mouths in the lipreading scene say, ‘Can you read my lips?’”

“Audibly, I wanted the viewer to really experience what it’s like to have hearing loss and tinnitus. The film truly mimics what I hear all the time, during and after a vestibular ‘attack’. For example, there’s a constant underwater-type sound throughout because my ear hears lower frequencies better, so everyone sounds like they’re underwater to me.” Emily had to master two new skills for the project - Photoshop animation, which was necessary to produce the 182 layers per frame, and audio editing. “Having both hearing loss and tinnitus, working with audio isn’t something I find easy. However, the outcome was worth the hard work, and creating the soundscape was enjoyable. I think it took the experience to another level.”

Before enrolling at UCA Canterbury, Emily studied creative subjects including graphic design, art and photography at school and sixth form.

“I’ve always loved drawing and animation,” she says. “Like many other kids, I was constantly doodling. My first attempts were flipbooks, then I moved onto Lego stop motion animations. I recently discovered those Lego creations on an old USB – they’re shaky, and none are more than a few seconds long, but I was so proud of them. Looking back, it’s nice to see how far my skills have come.”

After sixth form, Emily began experimenting with animation, teaching herself online. “I wanted to learn more, and I saw an advert for UCA, so I began looking into courses,” she says. “I didn't want to stifle my inner illustrator, so the Illustration & Animation course was perfect, as it allowed me to explore both my passions.”

“I love animation as a medium for expression, because of how universal it is,” she continues.  “Anyone can watch, enjoy and take something away from it. It lets us tell stories and communicate emotions and ideas in a unique, easy to perceive way that everyone can understand. There is something almost magical about watching a drawing come to life - it never gets old.”

‘Spinning into Silence’ has now received multiple awards, including the Best Animation Short Award and a Best Student Short Award at Accord Cine Fest. It has also been screened at film festivals locally, and abroad. “This means awareness is being raised, not just in the UK, but in other countries, too,” says Emily. “I hope the success continues, and the message gets heard by as many people as possible. Currently, there is no cure for Vestibular Disorders, but if awareness is raised and more research conducted, I hope better treatments or a cure will be found.”

Now that Emily has finished her degree, she hopes to gain further animation experience, with the ultimate goal of working for a large animation company.

You can explore more work by Emily and the UCA Class of 2021 at gradshows.uca.ac.uk