UCA graduate Nathan Spiers’ experiences as a student with autism have inspired him to design a chair that helps primary school children to find calm and focus in the classroom. The brief for Nathan’s final project for his BA (Hons) Product and Furniture Design degree was to design a human-centred product that was also in alignment with one of the United Nation’s Sustainable Design Goals. His response was to focus on the needs of primary school children on the autistic spectrum, as well as the preservation of ocean environments.

"The driving force behind my work was my own personal experience with autism,” says Nathan. “As someone who went undiagnosed until age 11, I felt that had I been diagnosed sooner my experience in the classroom could have been more positive. While it’s too late for me, changes can be made to improve educational environments for children who, like me, may find their surroundings uncomfortable.”

Sensory overload from background noise and other external stimuli is a common issue for people with autism and can make it harder for children with the condition to concentrate. Nathan’s goal was to develop a chair for primary schools that helps moderate and reduce auditory stimuli within a classroom, creating a ‘bubble’ or cocoon to support focus.

“I wanted to redesign a typical primary school chair so that it can be used when and if a child becomes overstimulated by their immediate environment,” he explains. “It helps to separate the child from the outside world, much like if someone were to figuratively ‘zone out’” during a stressful point in their day.” 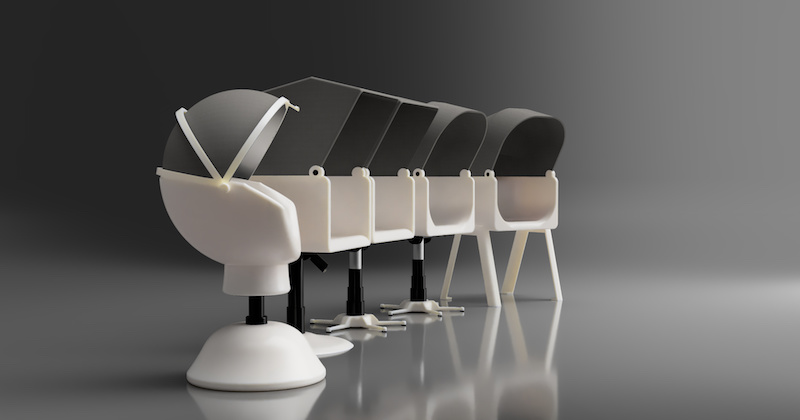 “I hope the chair can offer a feasible option for mainstream schools to help students control their personal space. The aim is to support their learning, as well as promote awareness and acceptance of the condition among staff and other students.”

“The design was influenced by conventional school chairs, adjustable stroller hoods, enclosed seating and other sensory design elements involving touch, sight and hearing,” he adds. “At the time I worked on it, schools were closed due to Covid, so I was unable to observe students in the classroom or correspond with teaching staff. However, I was able to draw on my own experiences, books, blogs, groups and websites, so I could be confident about my creative decisions.”

An what about the environmental aspect? “My choice of material was informed by the sheer amount of plastic pollution in our oceans,” says Nathan. “Research shows that the most commonly-found waste materials within our oceans are PP, HDPE, LDPE & PET plastics (used for single-use plastic products), all of which can be used to make chairs. So I wanted to incorporate salvaged plastic, recycling and remanufacturing it through a circular economic design process.

“Having discussed it with my tutors, I discovered rotational moulding would best suit the design. I also found a London-based textile company that has developed a fabric made from oceanic plastic that could be used for the hood.”

“I’m planning on improving my design until I get the chance to manufacture it. The reception from tutors, peers, friends, family and other members of the design and ASD communities has been positive, to say the least, so I know my time and energy has been well invested.

“Autism can suck - it’s prevented me from doing things my peers would perceive as straightforward. But having the opportunity to talk about this with my peers was a major step forward in my development – not just as a designer, but as a person.”

“The thing I’m most proud of is that, on a personal level, this is the first piece of work I’ve done which addresses the aspect of myself that I have long felt held me back.

“Autism can suck - it’s prevented me from doing things that my peers would perceive as straightforward (going to parties, asking for help, going on dates, etc.) and it hasn’t been the easiest thing to talk about. But I wouldn’t change a thing if it meant that I still got to be where I am today. The fact that I’ve had the opportunity to talk about this with my peers was a major step forward in my development, not just as a designer, but as a person as well.”

Going forward, Nathan’s ambition is to work as a conceptual designer. “I know that, wherever I work, I’ll carry a newfound perspective with me, and apply it in ways that help those like me,” he says. “The thing I love most about product design is the discovery of new and interesting ideas, as well as meeting the diverse people who dare to make them, who’ll stop at nothing to pursue their ambition of creating a better world.

“I’ve studied with them, learned from them, and perhaps one day I can do the same for a new generation.”

You can find more work by Nathan at @nathands_design on Instagram and see more from the UCA Class of 2021 at gradshows.uca.ac.uk