A mural design project in Kent has been won by second-year UCA Illustration and Animation student James Brickell.

Run by Kristofer Adelaide Architects and Tristan Properties, the mural will brighten up hoardings around a building site in central Sittingbourne in Kent, which is part of a regeneration scheme.

Kristofer is an Alumni of Interior Architecture & Design at UCA Canterbury, where James studies. He opened up the project to UCA Illustration and Animation students hoping their ideas could add a splash of colour to their town centre development.

"When this opportunity presented itself, I could not think of any other better solution than to offer this to a student at UCA," he said. 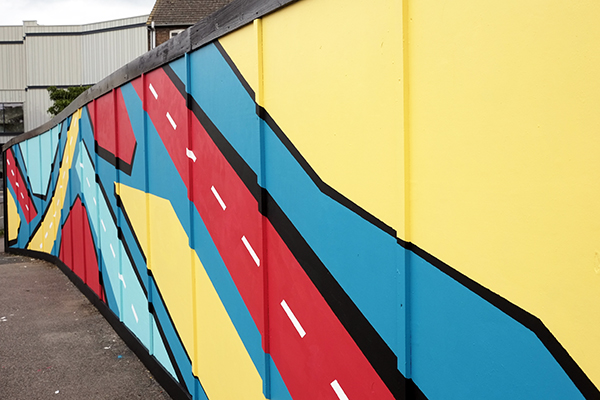 James’ winning design originated from his interest in the Pilgrims Way, having grown up in Winchester and now studying in Canterbury – the start and end of the famous trail.

With Sittingbourne as a stop on this historical route, James explored the concept of ‘journey’ and used a road motif to a create bright, bold and impactful design.

“It was really exciting engaging with people from Sittingbourne. Passers-by and drivers seem to be enjoying the mural and its colourful design,” he said. “I hope people embrace the work and it brightens up their day.” 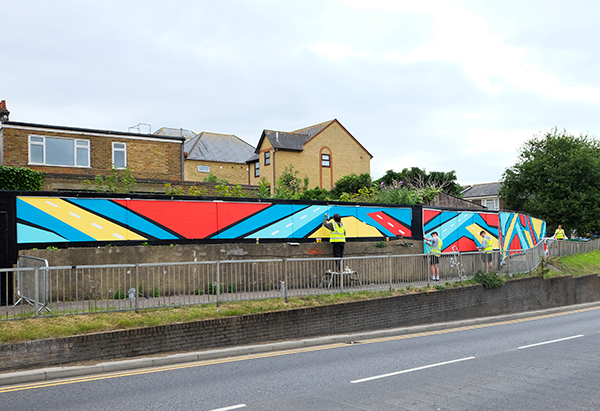 "James captured the idea of pilgrimage in a strikingly modern way," said Kristofer. "The thoroughness of his work and his proposal captured our imaginations. He had thought of every detail and from the first day of painting you could see James as a ‘lead designer’. He has helped us to beautify a once very drab looking location."

In the installation of the mural, James was assisted by his fellow students, tutors and Greg Stobbs, a freelance Illustrator and street artist.

“There was an oddness and fascination in seeing my final design materialise into a large-scale mural,” explained James. “At first, it was a slightly daunting task, but I had some excellent help and have gained a great deal of knowledge, especially around building relationships with clients and the logistical planning of large-scale events. I now hope to springboard off the back of this experience into my final year and into my future career as a creative practitioner.”