Artists and filmmakers respond to themes of migration and belonging

The University for the Creative Arts hosted the ‘Space and Belonging Symposium: Narratives of Migration, Materials and Gentrification’, which invited artists and filmmakers to respond to themes of movement, migration and materials.

The day was introduced by Stephen Connolly and Maren Hahnfeld, lecturers on the BA (Hons) Film Production course, with David Rule (Photography BA) joint organisers of the symposium. “Artists are looking beyond classical narratives of the individual in moving image to drive stories and negotiate the world.” according to Stephen. “Ten artists will present their individual responses to themes of movement through space - in their own complex stories of migration or that of materials they value.”

Joe Lawlor, with Christine Molloy known as the filmmaking duo Desperate Optimists, described the journeys taken in their feature-length documentary and fiction work. Joe explored how migration transforms a person’s identity, and how they capture this process as filmmakers by writing with images. Joe said: “Travelling and migrating has this power to transform and create complex notions of identity. The journey itself changes you. As artists, we are interested in knowing what this change is, and the thinking process that leads up to the moment of migration or journey. The dreaming about it.” 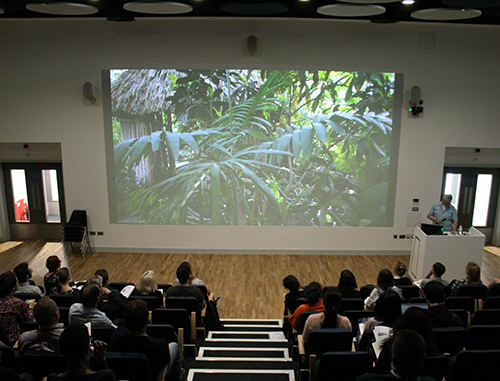 Presentations from Minou Norouzi, John Podpadec, Minna Pöllänen & Will Jennings, and Deniz Sözen explored narratives of migration between the powerful associations and affiliations of places; where belonging can be open to question. Katy Beinart, Estéfani Bouza, and Vesna Lukic looked to the movement of materials - salt, coal and the rare earth element Strontium - as vehicles for telling social narratives and archiving the past.

The day ended with a keynote by Professor Alison Blunt and Dr Olivia Sheringham from Queen Mary, University of London (QMUL), who sought to answer questions about home and belonging in their diverse inner city area through creative projects in partnership with their local community. 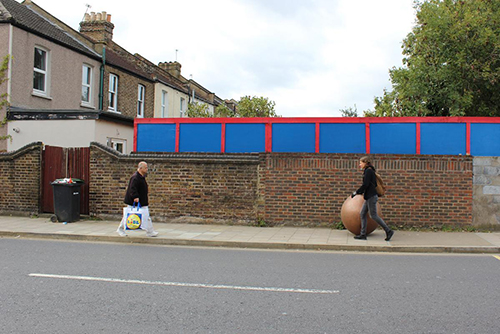 Globe, a one-metre diameter copper spherical sculpture with onboard video cameras created by artist Janetka Platum, gave its name to one of these projects. Janetka rolled the Globe through the streets of east London, the presence of this beautiful object engaging the public and starting conversations on ideas of home, belonging and community.

These personal narratives were juxtaposed with the tumbling images of Globe’s revolving footage and shown as part of a final film. Globe became an artwork in its own right, shaped by its movement through the places of East London. Dr Olivia Sheringham said: “The malleable surface of the globe carries the marks of its journeys. These imprints will be an enduring monument to the area.”

Professor Alison Blunt added: “Our work on these collaborative projects is part of a broader attempt to rethink connections between the domestic and the urban and some of the broader questions we are interested in asking are – what does it mean to feel at home or not at home in the city, and how is urban dwelling shaped by migration and other mobilities.”

The Space and Belonging Symposium was organised by Stephen Connolly, Maren Hahnfeld, and David Rule, film and photography lecturers at UCA Farnham.

To find out more about UCA’s film courses click here.