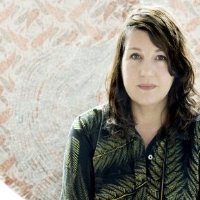 Shelly Goldsmith's most recent work explores the 'imprint' of our lives and thoughts on the surface of the garments we wear - making visible psychological emotions, thoughts and memories.

Shelly Goldsmith joined the University for the Creative Arts  in 2013  as a Senior Lecturer teaching on the BA Fashion Textiles: Print  program and recently also contributing to the MA Textiles for Fashion and Interiors. Shelly had previously contributed to programs within the university as a visiting lecturer and external validation panel member.

Prior to joining UCA she devised and established the Textile Art Department at Winchester School of Art, University of Southampton, leading both the BA and MA programmes.

Shelly has taught across a number of textile design and fine art programs within the UK, in Australia, Japan and Europe. She is an experienced external examiner; she has acted as an advisor on Bachelor of Arts validations and UK funding bodies.

Shelly graduated with an MA with distinction from the Royal College of Art, previously with a Bachelors degree from West Surrey College of Art and Design, now UCA Farnham.

She has exhibited at major galleries and museums in Britain, in Europe, the USA and Japan; her work is in many notable public collections including the Victoria & Albert Museum; Nottingham Castle Museum and the Whitworth Museum, Manchester.

Shelly is an active researcher, investigating textiles at the cusp of fine art and craft practice. She was awarded the prestigious Jerwood Prize, for Textiles and short-listed for the LICC International Creative Award. She contributes to conferences and seminars and has authored articles for magazines, journals and catalogues.

Engaging with textiles within a gallery and site specific context I often respond to historical environments and/or partnerships such as the Forensic Science Service, the Herbarium at the Natural History Museum or the Harris Birthright Centre for Neonatal Medicine at Kings College Hospital.

Using methodologies and theories borrowed/inspired by these partnerships, I am most concerned with exploring and presenting latent experience and memory inherent in worn clothing. I am concerned especially with the fine veneer of cloth that stands between us and the world; often a veil to the interior storm or psychological landscape.

I work with a collection of gathered and/or gifted garments. ‘Listening’ carefully to the stories these reclaimed garments present enables narrative to develop, especially when imagining the cloth’s ability to carry memory, to absorb and reflect experience.

The final artworks are often presented as a metaphor for emotional states, common human experience and present an opportunity for self- reflection and personal insight.

My most recent (Arts Council and UCA funded) work explores the imprint of our ‘sense of self’ onto the inside ‘private’ surface as well as the ‘public’ external surface of the clothes we wear – making visible psychological emotions thoughts and memories. Working with Dr. Herminia Hernaiz- Sanders Clinical psychologist at the Maudsley Hospital, London I am exploring the ‘Locus of Control’ theory.

Working with a range of traditional hand-methods as well as new textile technology, I’m interested in the individual and interrelated power for expression and communication they present and the material and conceptual relationships which ensue.

Shelly is a Fellow of the Higher Education Academy and member of the European Textile Network, the Slow Textiles Group , the Textile Society, Contemporary Applied Arts and the Assembly of Artists.